In which the silence was broken again. 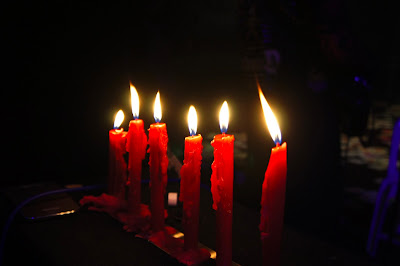 One very special night to end the curse.

In which all that was planned came together in a celebration of triumph over adversity. The past was bestowed its final funerary rites & the future beckons like a glowing bride behind the perfunctory nuptial veil.

Words fail to express, so let these pictures speak on my behalf. 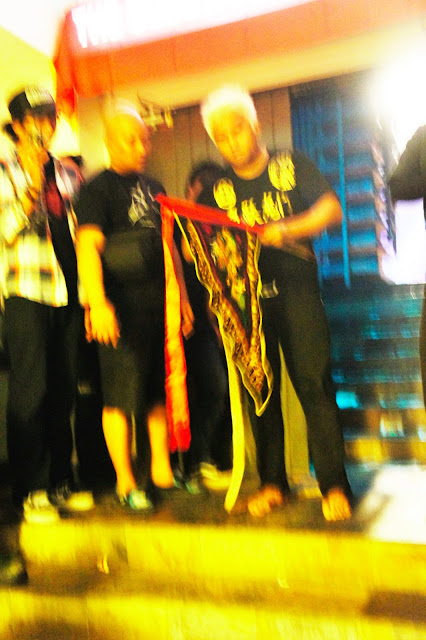 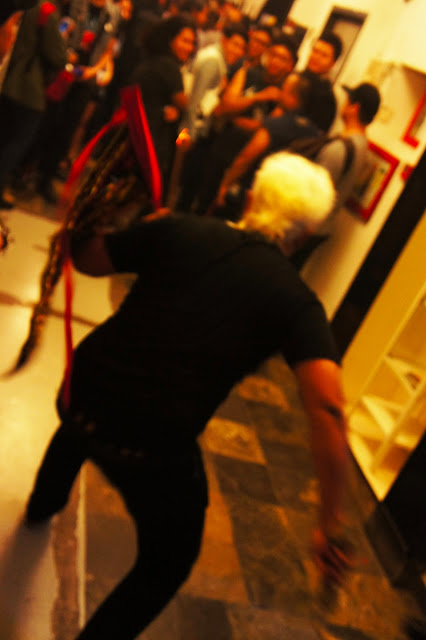 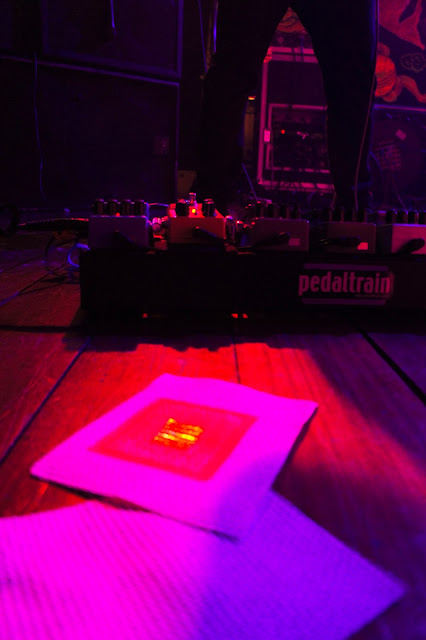 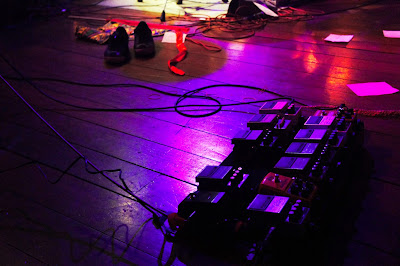 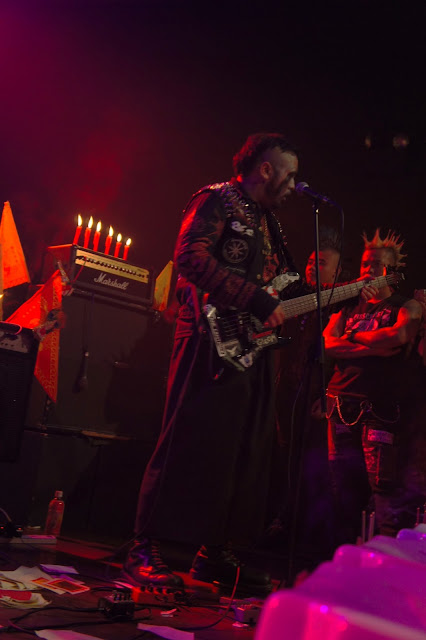 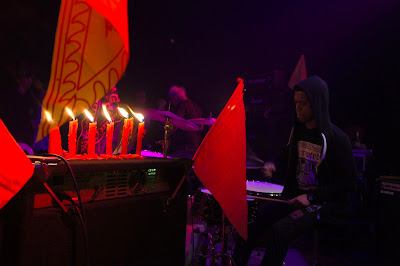 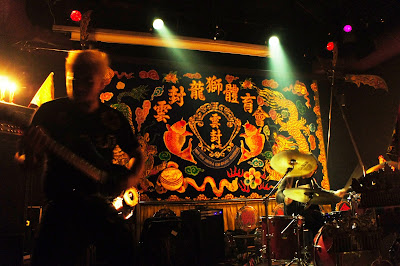 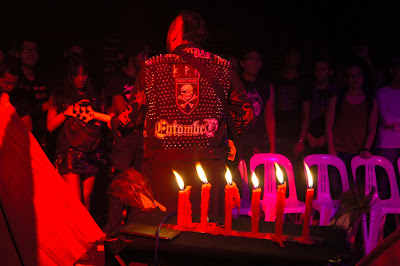 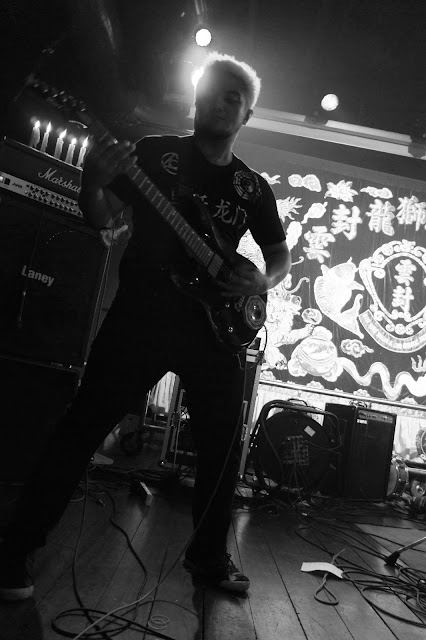 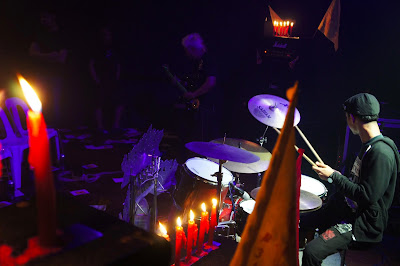 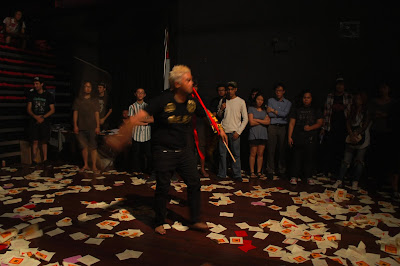 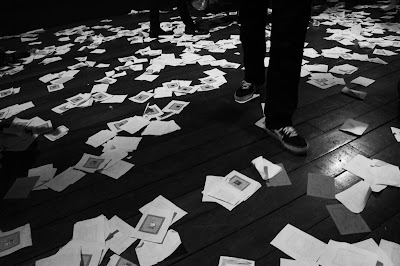 Say it once more.

Peace.
Posted by The True Zachariah Elias at 3:51 am No comments:

In which the silence was broken.

The heat. The thirst. The fatigue. The tension & the silent, seething rage. Words best left unsaid for fear of rendering the sacrifices made null & void. The pleas for mercy & grace from the unseen Force whose presence is all too real.

And finally, I can break the silence; not with clenched fists, grinding teeth or body bent out of shape in fits of catharsis ... but with a simple greeting of "Peace".

In whichever language you say it.

Posted by The True Zachariah Elias at 10:52 pm 2 comments:

Last week on Friday 13th July 2012, I played a gig. It was alright. I had fun but some people in the audience thought it wasn't so funny. I have no idea why.


During the show, I used a number of stompboxes to get the effects necessary to facilitate and convey particular passages in the short set we did.

But one pedal I will never ever use again, is this one:

Posted by The True Zachariah Elias at 5:25 pm No comments:

A few weeks ago after a particularly gruelling "dance-off" in the afternoon, I gallivanted in the Eastern part of Singapore looking for something to eat. To make a short story even shorter I ended up in some offbeat-looking Muslim coffeeshop where they serve a very palatable version of a dish called "kacang phool".

For the uninitiated, it's a South-east asian bastardization of an Egyptian staple - "ful medammes". Whereas the Egyptian version consists of cooked and mashed fava beans served with olive oil, chopped parsley, onion,garlic, and lemon juice, the local version adds minced beef, curry powder, chillies & the triumvirate of onion, garlic & ginger to the fava bean base ingredient. All in all, a rather distinct but not much different dish from the Masry original. Distinto, pero no mucho diferente, as they say around here. Or maybe not.

Served with lightly toasted french loaf & the add-ons of a sunny side up egg, coarsely-chopped raw onions & green chillies (optional, since we live in a "democratic" society), a lime slice & salt, you can only imagine the interesting contrast of flavors - you add as much salt & lime juice to the dish or you mix the two together as a dipping sauce before attacking the warm, gruel-like slob of delicious spiced hell that sits in the shallow bowl; it watches you & patiently waits for the time when first contact is made with the tastebuds - from then on, you will not be the consumer - it consumes YOU….like a mutant quicksand pool from stereotype-laden old movies about doomed African jungle explorations.

A slow & painful death will occur in your gastrointestinal tract while its exit will be gloriously fiery & more dramatic than a pregnant Malay divorcee with 2 kids & a bad ketamine addiction (you mean there's a good ketamine addiction?). But like all things that are not really good for you, it tastes GREAT. The dish, that is....... not the pregnant addict divorcee…..but hey, whatever rocks your boat.

But this post is not about the dish or the meal.

It's about what happened AFTER the meal. Not in the scatological sense though.

You see, a bunch of huge red bikes came roaring into the picture. Big, fancy Italian machines that purred & roared (not necessarily in that order) as their owners revved the engines, making sure that all & sundry were privy to the fact that the cavalry has arrived.

This motorcycle group; numbering around 20, trophy female pillion riders and all, then proceeded to sit at the reserved tables near where I was. Ah! An afternoon soiree! Apparently, as my ears pricked to hear the conversations that they were having, these guys & girls were celebrating a birthday for someone in their motor-minded clique. Why, how nice!

But then among them was this short, sad-looking, dark & quite overweight member of the group. This guy (who had the kind of look like he got eternally friend-zoned) was wearing an oversized black t-shirt, possibly in a half-assed attempt to hide his rubenesque figure, baggy pants (bulge-hiding attempt #2) and black-rimmed hipster nerd glasses (probably a sad statement to say "Hey I'm kinda interesting too!"). All in all, a stark and damning contrast to the aesthetically-pleasing specimens around him whose physical conditions literally scream their superiority & priority for breeding. While the rest sat around in small cliques making even smaller talk or had a fashionably-aloof smoke away from the eating establishment, this dude was walking around with an expensive DSLR camera around his neck taking pictures of everyone.

As I stealthily watched (like a trained Mossad shylock spy, if I may add), no one offered to take a picture of him in the group shots. Nobody even bothered to talk much to him. I squirmed in my seat and squinted in pain as I imagined myself in his shoes, the luxury of wearing shades in the afternoon heat hiding my eyes from being spotted by the group as I watched each excruciating second tick by while our little friend kept getting increasingly isolated.

Pretty soon I felt that I've had enough & left the place before it became unbearable. Last I saw, he was taking pictures of the very overweight cat that has made himself the resident feline of the coffeeshop. The cat must have felt pretty smug that day; someone way fatter than the cat was going "Aww it's so cute" while no one was giving a fuck, much less a tummy rub to the human blob which was taking its picture & giving it attention & warmth.

So what has the Halo Effect got to do with this post?  It can be summarized as the resultant findings of a psychological experiment carried out initially by American psychologist Edward Thorndike & further carried on in later years by other students of the human mind. One particular study by Dion & Berscheid et al (1972) concludes that “not only are physically attractive persons assumed to possess more socially desirable personalities than those of lesser attractiveness, but it is presumed that their lives will be happier and more successful" - therefore the "Halo effect".

Really? How then does it apply to what I've just seen or is it even applicable at all?

I was a casual observer adding my own bias-tinged back-stories & subtitles, nuances & "je ne sais quoi" to whatever it is that I saw. Is this fair to the protagonists & supporting cast of this all-too-human drama that unfolded? Who's to say that my deductions & observations were not spot-on? Maybe, maybe not. What it did was provide heuristic reinforcement to my already skewed bias that now, more than ever; "what is beautiful is good" holds much more sway than the necessary work needed to scratch the surface & see the good beneath. Which kinda sucks.

And who the hell cares anyway, right?

Posted by The True Zachariah Elias at 1:19 pm 2 comments:

Last week, a high-speed car crash in Singapore involving a Ferrari, a Hyundai Sonata taxicab & (reportedly) a Honda Super 4 motorbike resulted in 3 deaths - a Chinese national who drove the Ferrari, the Chinese Singaporean taxi driver & his passenger, a Japanese woman.

Also injured in the horrific accident was the passenger in the Ferrari; a female Chinese national (who's quite badly wounded) & a Malay male/naughty brown boy type who rode the Super 4 (suspected spinal injury but in a stable condition, alive & kicking).

So what is the moral of the story?

"You can't keep a brown man down."

Posted by The True Zachariah Elias at 4:07 pm 3 comments:

The video below is that of 80s Malaysian pop-singer Raja Ema. She has a penchant for acting a little bit too cute for her age & her own good. She embodies everything that was kitschy & OTT about that particular era. Think Cyndi Lauper meets Hannah Montana meets Nicki Minaj. Yes, my brains bled too, from all that thinking.

So what has that got to do with the title of today's post?

Well, I don't know if I want to give her some candy or punch her in the face.

The Casiotone intro is the kind of stuff today's hipsters should be jizzing in their skinny khaki pants to. And if you watch the video until its blood-soaked, christ-impaling, virgin guts-ripping fiery finale, the pose at the end is also a classic. It's even more awesome than Quorthon of Bathory's infamous firebreathing picture.

Now, this is what blew my mind & I'm pretty sure will blow yours too.

Posted by The True Zachariah Elias at 7:56 pm 2 comments:

Post-modernism & the Art of Posting Pictures That Say It All 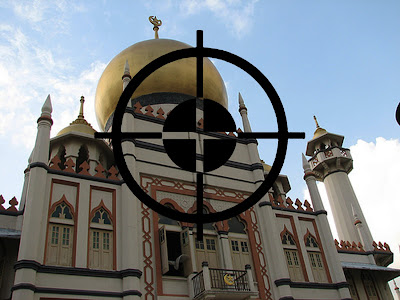 Lest the PC police (or better still the REAL police, not the "Every Breath You Take" Police) get on my case; I am pro-Islam, I am just anti-Muslim. A message to rudie: Get your filthy hands off my religion.
Posted by The True Zachariah Elias at 8:12 pm No comments: